My lovely new computer, has died, lights are still flashing but the screen is ominously blank. So now it’s time to master the laptop.

Perhaps I should have taken a proper computer course? Maybe then I’d have known not to press the ‘all’ button when signing up for Linked-in. I didn’t even have that stomach-churning moment when you realise you’ve sent the wrong e-mail the wrong person. I didn’t realise until this morning when my ex-dentist e-mailed me to thank me, but declined the invitation, it seems he doesn’t want to be my friend! is it something to do with the EX in ex-dentist? I guess my cardiologist may feel the same, but the man who empties our septic tank may be glad of a friend. I daren’t look to see who else is on my address list. Tip for the day: never, ever, click the ‘all’ box.

I walked out this morning with dogs but without camera. The morning seemed dull and unexciting and I couldn’t imagine that I’d have anything to snap. But cutting through Hut Wood I came across a sea of wood anemones, all muddled together with the last of the aconites. They begged to be photographed.  I carried on around the farm, went back to the cottage, collected my camera and proceeded to repeat the walk again. A mile, and two very puzzled dogs later, I returned with the prized photograph. 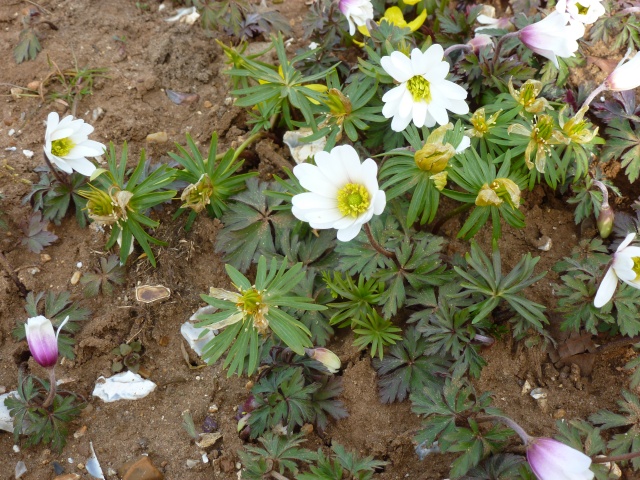 The cows have been moved to home meadow, and the ladies have a new and very handsome companion.

He has a lovely brass ring in his nose, and I’m sure the ladies just love those deep brown eyes.

He does however come with a health warning. 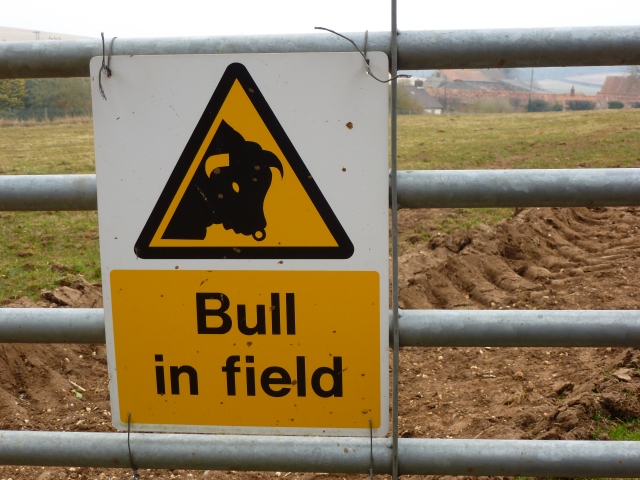 Whatever happened to Beware of the Bull?

Sheep are more my thing, and when I first came to live here, over thirty years ago, I took over the flock. A sharp learning curve – I remember asking if sheep bit, (they don’t).

My flock eventually numbered over 500 and so expert did I become that I even bred a few Charolaise rams. Every year seemed to bring a new experience – like taking the first two ram-lambs to Melton Mowbray Market. I had no idea before then that these creatures had to be shampooed and preened ready for their debut, even hooves are polished!

It was a memorable day; think, thirty mile into the journey and a broken-down Land Rover; think, transferring two skittish, rather fluffy, sheep into the back of the family car. But most of all, think of me trying to explain to the garage attendant that they were not pets out for a days outing, and no, they would not like a bag of crisps. What made it worse, I only sold one ram and had the indignity of returning other ram home, again chauffeured in style.

Ah yes, the sheep days, fluffy lambs gambling in the meadow and enjoying the spring sunshine. Of course, there was also eight weeks sleep deprivation during lambing, ghastly diseases, rain, mud and desperately trying to prevent each sheep from reaching its ultimate ambition. (A sheep’s function in life is to die; if it can die without the shepherd knowing ‘why’ it has died, then it has fulfilled its ultimate ambition) – I kid you not……………………………

I had only one real experience with cattle. Not one of my most successful business ventures. Many years ago I set up a little scheme where I, and four of the farm/estate workers bought four little calves. They cost us just a few pounds as, back then, dairy bull calves were of absolutely no use to the breeder; the heifers were kept for milk, but the bull calves were ‘disposed’ of. These particular calves were Ayrshires, a milk breed, not reckoned for beef production.

Our calves duly arrived, the farmer who sold them to us had kindly castrated them for us. so we were all set to go;  four sweet little bullocks, bucket fed and growing by the day.

Once turned out to pasture they grew at a tremendous rate, they also grew very ‘frisky’. On the days when I was scheduled to feed then, I would creep up by the hedge, leap over the gate, and make a dash for the trough. I spent more time on the ground than upright – but it was great entertainment value for those watching, including B, who thought me just a tad dramatic, (in truth I was rather frightened of them). Then one of the beast went down sick. The vet, trying to insert a drip into the animal’s neck remarked that he “had a hell of a neck on him”. As the beast was calm and immobile, I examined his underside, the appearance was smooth, but there was the definite tell-tale bumps under skin. Our ‘bullocks’, had had the ‘purses’ removed, but the goodies inside were still very much in evidence. We were now the nervous owners of four very frisky Ayrshire bulls!

After a few breathtakingly worrying weeks, loading and transporting  them, building a pen for them in the farm-yard (with scaffold poles), and getting them to market – what description in the catalogue? I don’t remember – I just kept a very low profile; but we did sell the beasts and, I seem to remember, made a very fair profit. Although we decided that it was an exercise not to be repeated.

But back to the here and now. A large Marquee is being erected in the Hall grounds and the Hall itself is all activity as a wedding is to take place there at the weekend – more details to follow.

Valbonne, made great progress yesterday and will near completion today.

When this one is finished I shall work on a plainer version, as my friend, Penny, very sensibly, wonders if many folk will want to give up a large chunk of life to knitting my intricate designs. Can’t think of anything better myself …………………………………am I a one off?

Oh and as a P.S. Charlie – my knight in shinning amour, (well, jeans and a jumper) has been over from the Hall and switched my computer screen back on – well, I didn’t know the screen had an on/off switch………………… Thanks Chaz, the rest of my young – cancel my SOS.