As fascinated as I was with Pamplona, it was good to get my walking boots on and rejoin the Camino. i realised that the city had robbed me of that quiet place in my heart, the noise and bustle drowning out the sorrow and the hope and the joy of the Camino, and taking Bernard a little further away from me…… 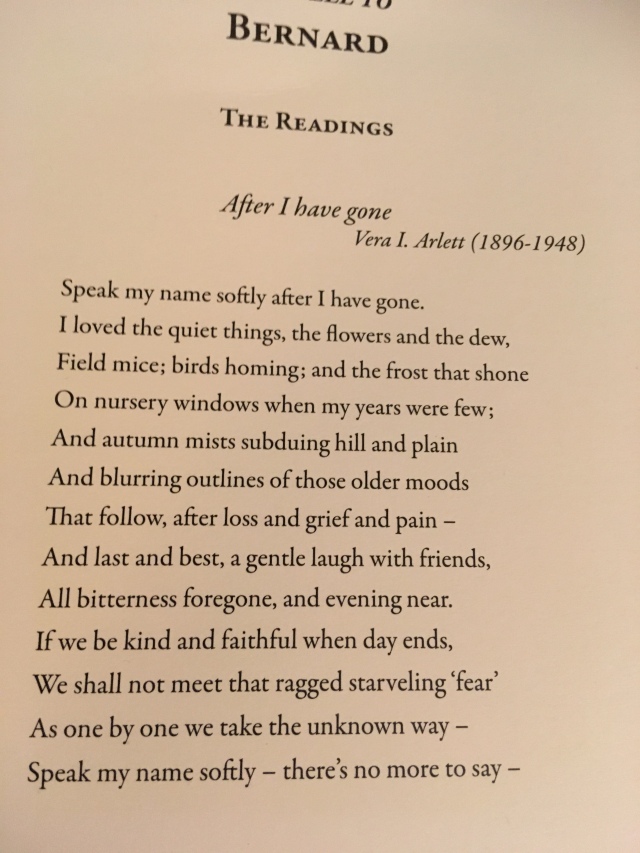 Which so describes the man I love, who can never be out of mind just because he is out of sight.

As I at last leave the city and trudge uphill and uphill, toward Zariquiegui and then uphill and up, up, uphill toward Alto de Perron, Bernard is once again with me. It was here on what is described in my guide book as “a very steep climb” that I met my first Pilgrim of the day, he was Spanish but spoke a little English. He told me he was worn out, that his backpack at 15 kilograms was weighing him down and he was ill prepared for the walk, he said he was twenty-two and had not dreamed how hard the Camino could be. I longed to lighten his load, to tell him that this was a spiritual journey, and that he should not sacrifice his mindfulness at the expense of his body, our bodies are just the wrapping our hearts and souls come packaged in. I suggested he went either on (or back) to the last/next auberge, where there are several courier services advertised and, for a mere 5€ a day, ones rucksack can be carried to the next stage on ones journey. I left him gazing over the valley, I do hope that he has been able to continue.

I puffed my way up to the ridge and the Monumento Peregrino a mere 770 metres above sea level…. 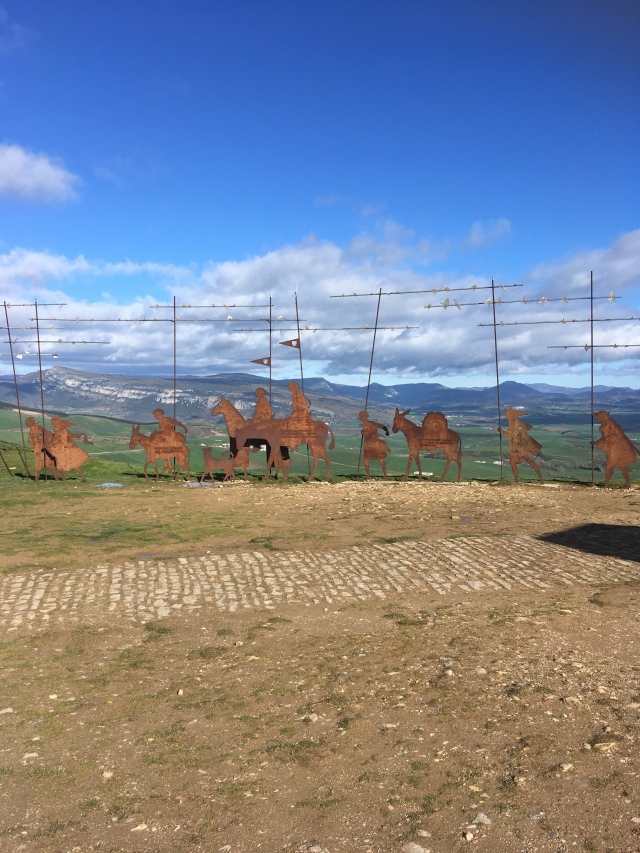 The sun was shining, my first day with no rain; without the sun shining on the pilgrims monument it does look much more dramatic……

Until the mid 19th century there was a pilgrims hospital here, pilgrims who reached the summit obtained forgiveness for their sins and, if my translation is correct, guaranteed a place in heaven.

There is a cheerful little sign that tells us that it is 700 kilometres (about 437 miles) to Santiago de Compostela, not far to go then!

It’s terribly windy on the ridge, but I had to linger despite the wind. All along the ridge are wind turbines silently turning and, for me, representing the age we are living in, a future where we no longer plunder the earth but use our God given natural resources, without harm to our precious planet…..

Another memorial must be inspected high above the Arga Valley. A circle of standing stones. A memorial to 92 people assassinated in 1936 and 1937 by the Francoist repressive regime, a tribute to the victims who were executed, without trial, and buried in mass graves, and a tribute to their families who were deprived of their homes, and livelihood. There is a large stone in the middle which symbolises all those who disappeared and 19 smaller stones arranged in an open spiral which represents the villages, towns and cities where part of the population were murdered. 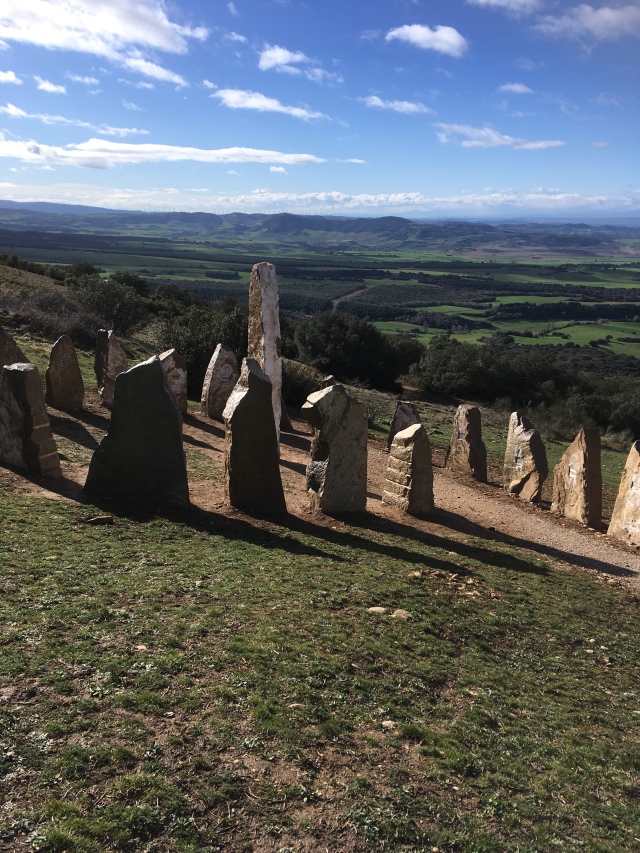 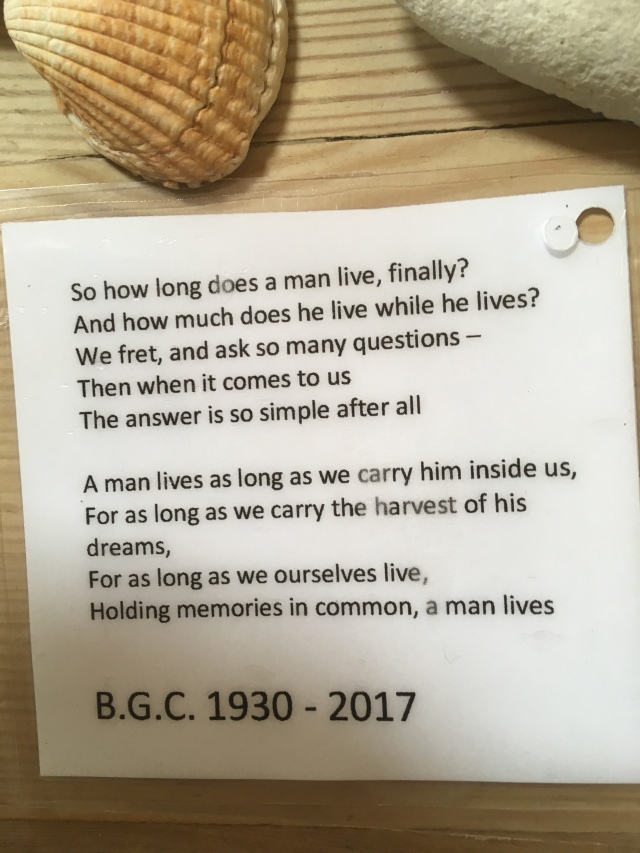 Suddenly, taking me quite by surprise, I come face to face with two middle aged men Pilgrims/walkers? American accents, having a heated argument about Ronald Reagan and Gorbachev! I say hello, they say hello, and return to their discussion, passing on and over the ridge, not glancing at the memorials nor marvelling at the view over the valley. Maybe they have walked the Camino so many times that there senses are jaded?

Finally I am on a downhill stretch, no more puffing and panting, just straight down to the valley floor, or so I thought, in fact the track, and it’s a long one, consists off a deep carpet of boulders…… 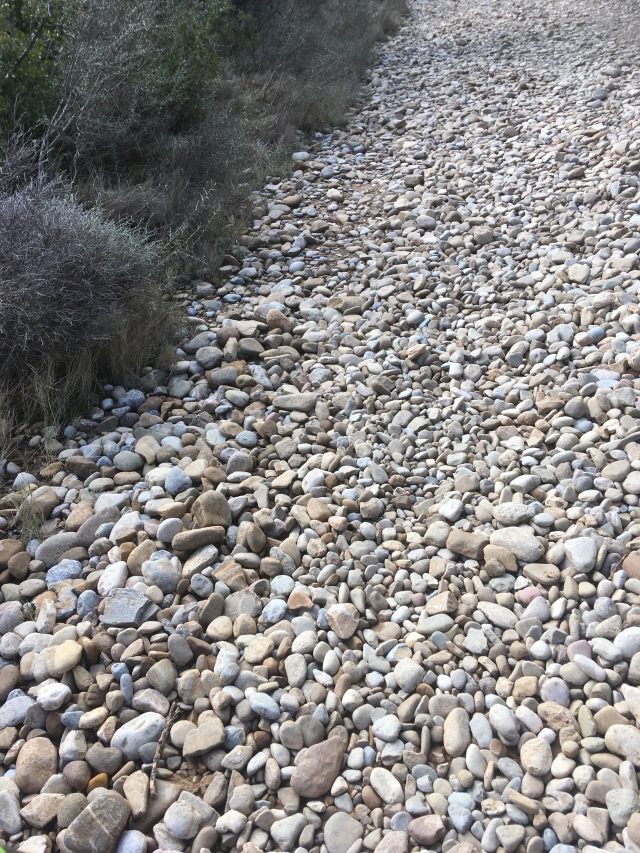 Hard on both the knees and this time the ankles, slippery too, it seemed to on and on forever, and it was a relief to be climbing again up to Uterga. Here there is a lovely statue in a shaded spot dedicated to The Virgin of Irunbidea. The statue was given to the village by a pilgrim who was worn and weary and felt that he just couldn’t go on. A six year old girl passed by and he asked her name, Maria, she replied. His faith and his strength were restored at the sound of her name and he went on to finish his pilgrimage, and he later gave the statue to the village. On the first Saturday of every month the villagers gather at the statue to pray. 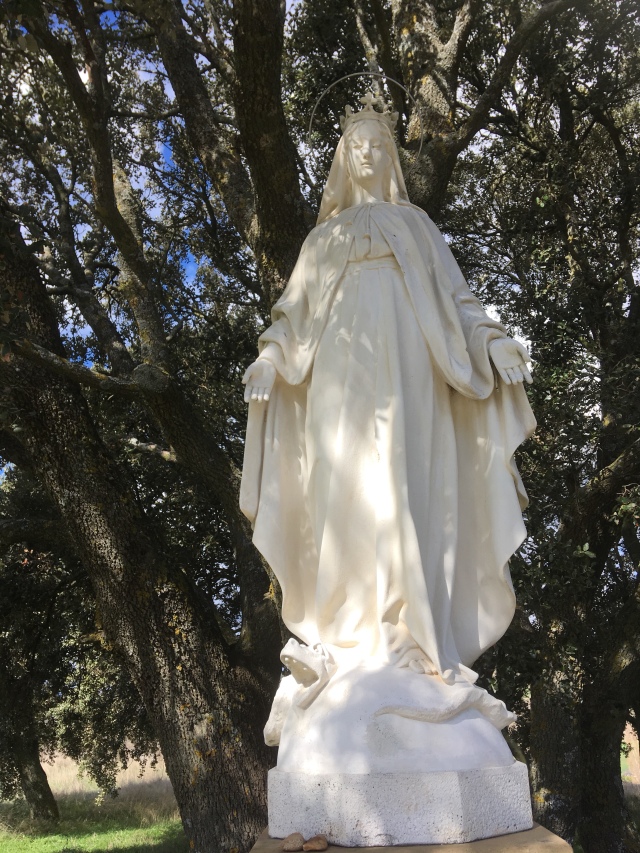 They that wait upon the Lord

Shall renew there strength;

They shall mount up with wings

They shall run and not grow weary;

They shall walk and will not faint.

The walking from then on was lovely, just a gentle undulating track between open plains with the wheat beginning to grow, giving that indescribable blue-green tinge to the fields and the vivid fields of mouth watering, bright green of the young barley and by the side of the track fruit trees laden with Mistletoe…….. 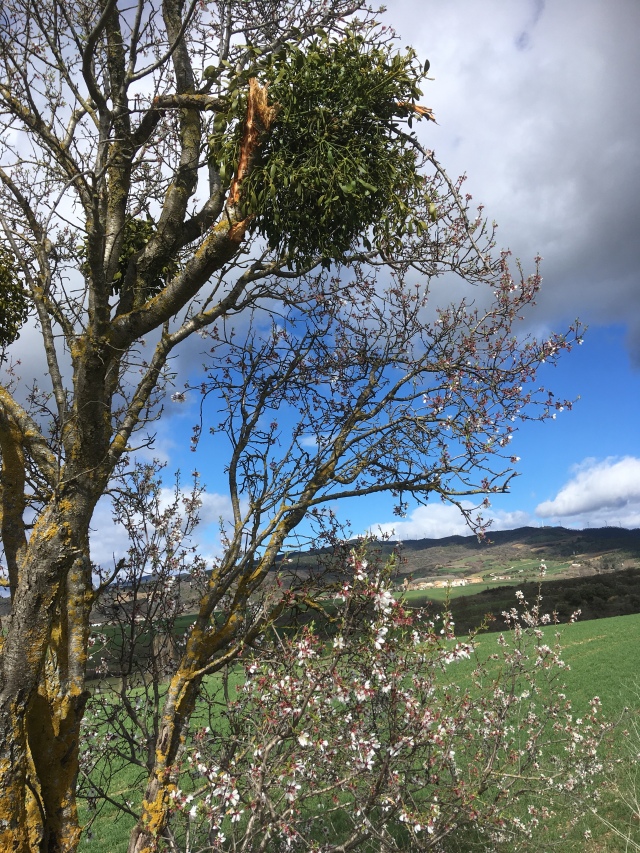 And lovely blossoms…….Bernard was definitely by my side now…… 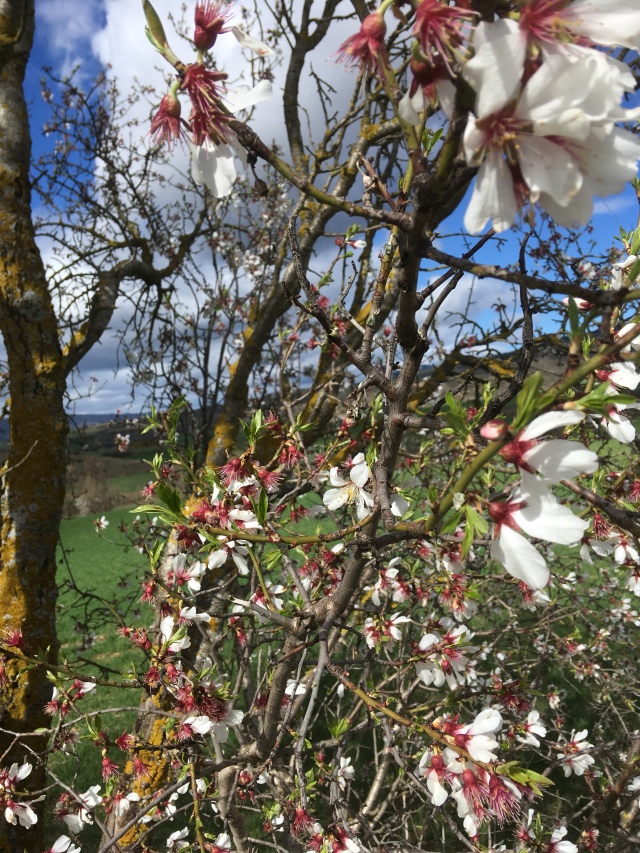 Then a slight hill into Obanos, and following the way through the town was delightful, as every few yards were the traditional scallop shells but here they were cast in bronze and laid into the pavements and roads…… 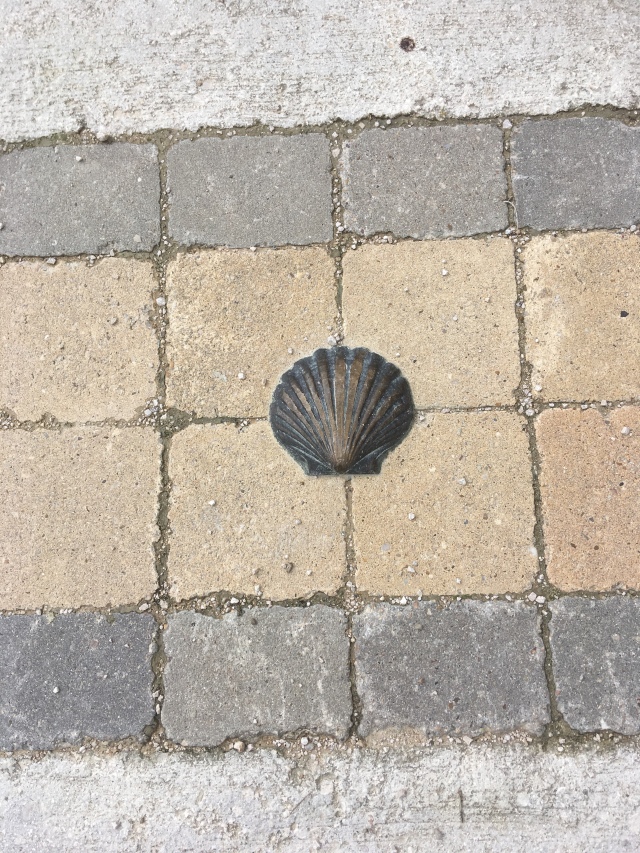 The lovely church at Obanos was, like most of the churches, locked…….. 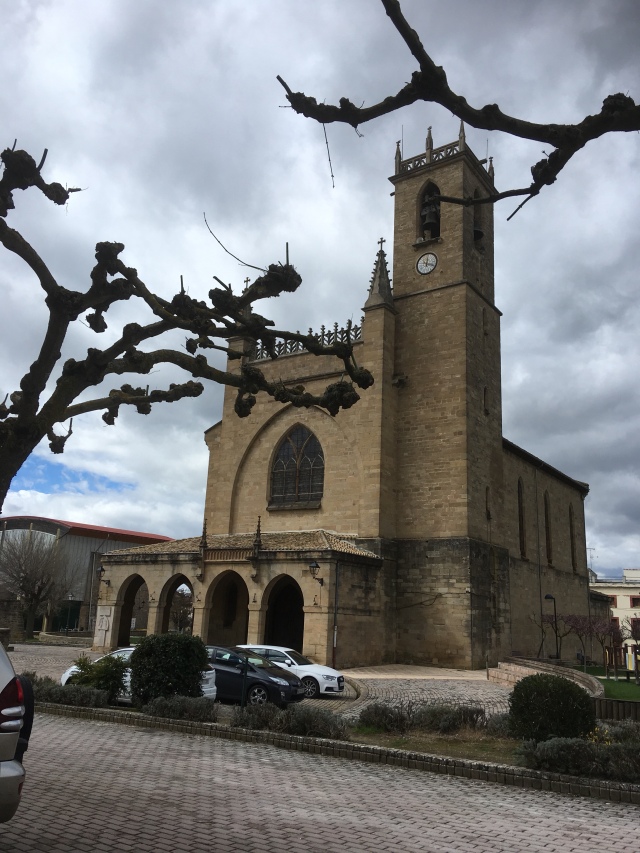 So my Pilgrim passport could not be stamped at the church, so once again I had to ask at the local bar for a stamp; I’m afraid my Pilgrimage passport may easily resemble a record of rather long pub crawl…….

I put the next photo in because B would have been fascinated with these variegated thistles. If my thistles looked like these I might easily give the garden over to them….. 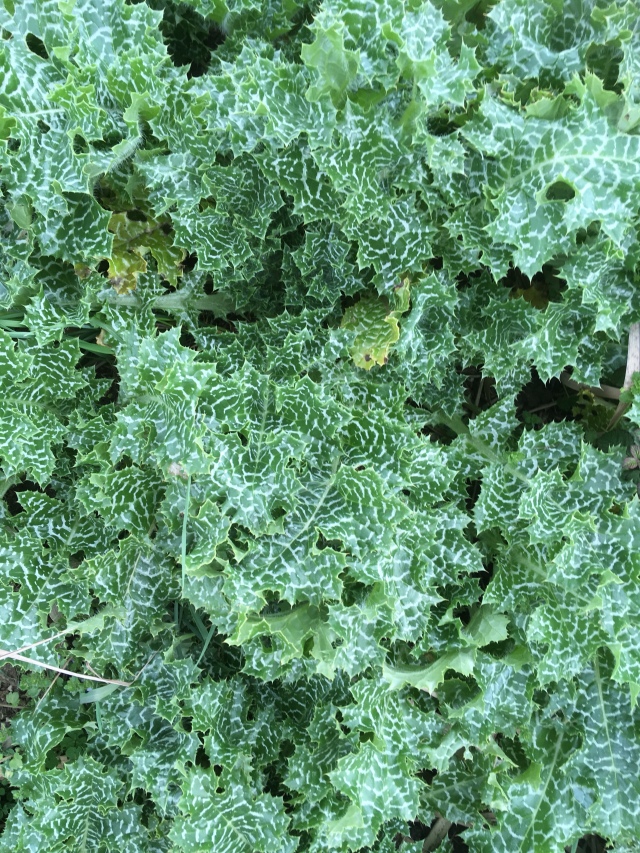 And finally after seeing only three pilgrims today, I arrive at my lodgings for the night and an 8€ buffet that consisted of a huge selection of salads, hot dishes and deserts, and get this, as much wine as one wanted, white, rose and red…… 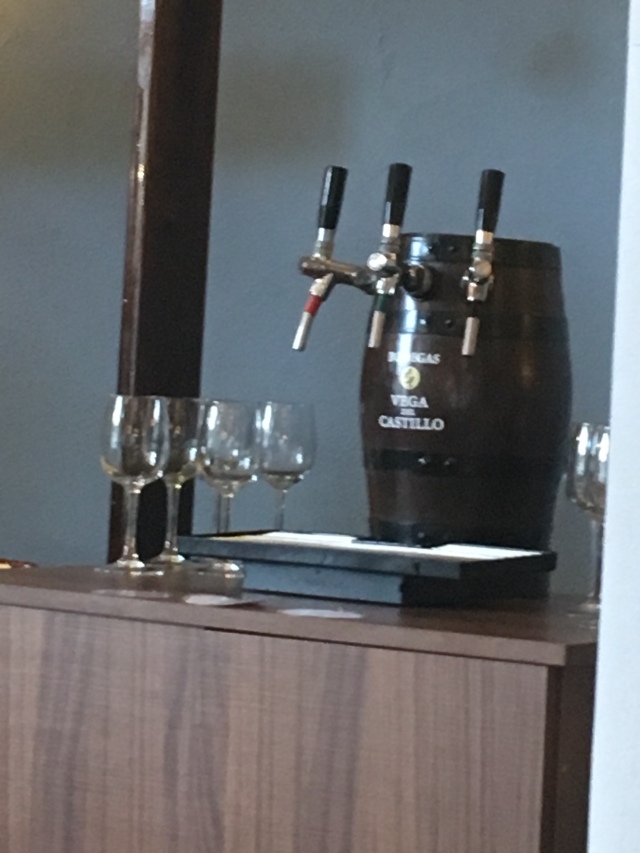 Okay maybe it is a rather long pub crawl….